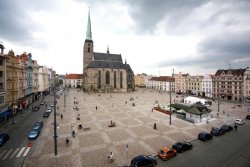 What you should visit?

Pilsen is the fourth largerst  city in the Czech Republic. It is located in western Bohemia at the confluence of the rivers Mže, Radbuza, Úhlava and Úslava. It is known mainly as a major industrial and brewing town. One can find the West Bohemian University and the Medical Faculty of Charles University. In 2015 Pilsen became European Capital of Culture.

The cathedral of St. Bartholomew is a gothic church located at the Main Square. The temple is a national monument, as well as the statue on its main altar, known as the Madonna of Pilsen. The Cathedral boasts the tallest church tower in the Czech Republic. (Entrance for students is 25CZK)

Special tip: During walking to the city center you should not miss small angel on the bars at the back of the cathedral. It brings good luck and if you touch it, some of your secret wish will be fulfill. It can be easily recognized, it is the most touched one.

The Great Synagogue was built in the Moorish-Romanesque style, it is the second largest synagogue in Europe (fourth in the world). (Entrance for students is 50CZK)

The Pilsner Urquell Brewery, the birthplace of the world-famous Pilsner Urquell is the largest brewery in the Czech Republic. Guided tour takes you through interactive senses exposition, history and modern operation of existing production lines. Finish of the tour will be at the brewery cellars with tasting unfiltered Pilsner 12°.

Beermuseum - You will learn about different ways of production and drinking beer in history, look through the late gothis malt house, kiln or historical lager cellars. In the tour is included tasting of small beer Pilsner Urquell.

Historical Underground was built under the town during 14th century, and with the lenght of 20 kilometers is one of the largest in the Czech Republic. Nearly 800 meters long tour takes you through a labyrinth of corridors, cellars and wells.